It’s the 78th over and Umesh Yadav screams in. Steven O’Keefe steps froward and smashes him straight back down the ground for four runs. Shot of the day.

What about Smith’s innings though? Supreme quality once again. Noted for his ungainly, stepping across and squaring up technique, Smith just gets it done. His balance and stability is exceptional. The shots that emerge at the end of all the fidgeting, squatting and stepping are as good as anything you’ll see in the modern game.

He was irate at himself for his dismissal but probably not as frustrated as he was at his fellow batsmen. The standard he sets and demands of his troops is high. Hard work, vigorous dedication and fight for momentum. Some of his mates let themselves down today but let’s not forget the bowling.

India surprised a few by not picking a back up batsmen for the injured Virat Kohli. They didn’t even pick Mohammed Shami. Instead they chose Bhuvinesh Kumar for Ishant and debuted the Chinaman Kuldeep Yadav.

Bhuvi was unlucky. Snicked up Warner first ball of the Test. Dropped by Karun Nair. But Kaldeep did the business. Trapping four wickets and stunning a few of the Aussie batsmen.

A moment in Kaldeep’s performance stuck out. Four wickets into his career, as fans chanted his name (literally), he delayed the game and called skipper Rahane and senior spin partner Ashwin in for a mid-pitch conference. Arms waved about. The young fella set demands and the field changed.

The kid could be a keeper but the Aussies hadn’t seen him before and admittedly, I have a soft spot for the oft harshly treated leggy, even if he is a lefty.

Back to O’Keefe’s drive for four in the 78th over.

The shot showed the wicket is good. That should concern Australia, just a little. Three hundred was a good result after a disastrous second session where India’s bowlers crashed through five top order players. The Aussies had been 1/131 at lunch.

Locals at the ground were happy with India’s position at stumps, thinking that after the first session Australia would be 400 by day’s end. But they lamented the Cummins-Wade partnership, feeling that once Ashwin removed Smith circa 208/6, they should have had Australia all-out for about 225.

Wade batted well though and the tail produced an invaluable wag.

I’ve seen every Test venue in Australia except Adelaide, probably the best one I hear? I’ve seen Lords, Chester-le-street in Durham, Edgbaston and Kensington Oval in Barbados and Queens Park Oval in Trinidad.

Dharamshala is the best ground I’ve seen. Actually. It’s the best ‘thing’ I’ve seen. Fans of Newlands may disagree, but Dharamshala must be the best? It seems unreal. Many fans I chatted to both from India and Australia mentioned dreamy periods throughout the day where they simply forgot the game and stared at the backdrop. 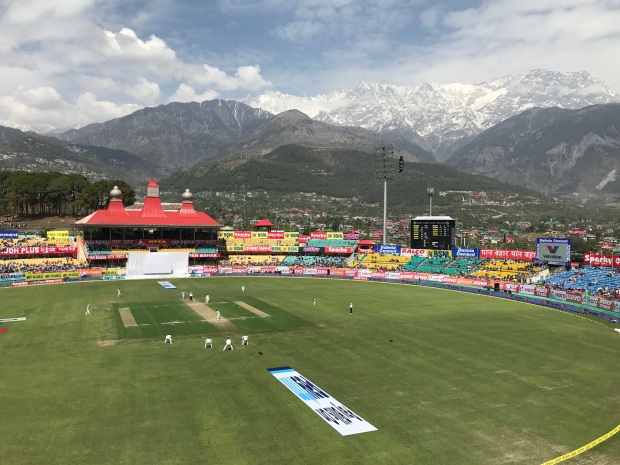 The crowd was confusing though. Disappointingly small, but young in demographic and certainly loud and enthusiastic. They knew their stuff.

Unfortunately there is no beer at Indian grounds. But that made the climb back up the hill and the arrival at our 270 year old heritage hotel pretty special. Ice cold beers were cracked and plans were made to see Hazlewood and Cummins rip in tomorrow (today for most of you).