Few expected Australia to be here. Heading to the fourth and final Test Match in India with a strong chance of winning the series. Actually. Nobody predicted this.

India are red hot at home and they are frothing to beat Australia. They had a massive chance to go 2-1 up today in Ranchi. Personally I thought we were done. 2 wickets down, 130odd behind on 1st innings and heading into the fifth day. Chances were Jadeja and Ashwin were going to murder our top order.

After touring the Taj Mahal at dawn and then heading to the Agra Fort we headed to a shop to examine some marbel scultpures. All out of our price range. Conversation soon turned to cricket. Away from the hotel’s wifi we had no internet and needed a source of information. It wasn;t far

I spotted a young lad supposed to be selling gifts, but preoccupied by his phone. He was grinning. I guessed he was either talking to a flame or he was on CricBuzz and India were taking wickets. It was the latter.

A few blokes laughed after they saw our faces when the news broke. Smith was gone and we had lost 4/75 and were still 70odd runs behind on 1st innings. Surely we were gone.

Five hours and 124 runs later we were still alive. Shaun Marsh and Peter Handscomb had batted defiantly and resisted the predatory Indian spinners. The record books will show a draw, but this partnership and the performances by Smith and Maxwell then Pujarra and Saha were of supreme quality. On a pitch that had looked like rolled mud on day one we were treated to memorable batting.

Virat Kohli certainly wasn’t interested in offering an easy hand shake for a draw near the end. As the minimum overs remaining fell below 10, and Australia’s lead grew past 40, one might have expected the call for a draw. But Kohli pressed on, perhaps dreamily imagining that his bowlers could finish Australia and then chase 40 odd from 4-5 overs. A fanciful idea that demonstrated his competitive spirit and desperation for a result.

So here we are at 1-1. Kohli and India are under huge pressure to win. For Australia, a win here is the holy grail. Imagine having a life long dream to watch Test cricket in India, gambling your travel on the last Test of the series and it materalising as the great decider in the foothills of the Himalayas. What a thing!

We all head to Dharamsala in the far north of India in the coming days for what will be an explosive climax.

Shortly after celebrating the draw and relishing the prospect of the decider I peered out my hotel window and saw some kids playing cricket in a field. I hesitated for a moment and then scrambled to get my shoes on to head down and ask to join in. The kids were delighted, they tossed me the ball straight away. I was lucky enough to have a bat and a bowl before heading off buzzing from the experience of playing some backyard cricket in India. I only stayed about 15 minutes as more kids were coming down from the surrounding building and racing across the fields. 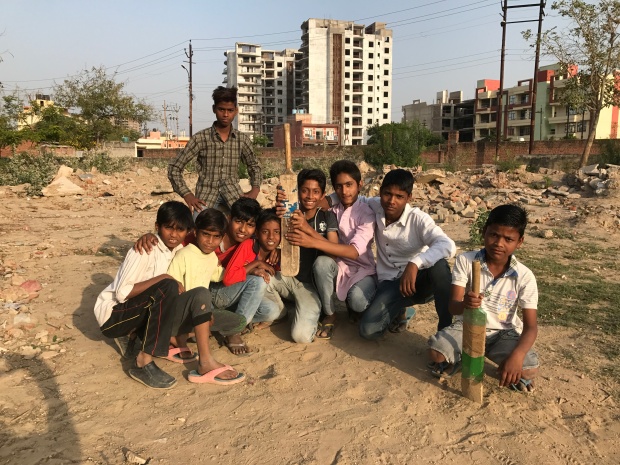